The start of the day is a little more special with twins in the mix. 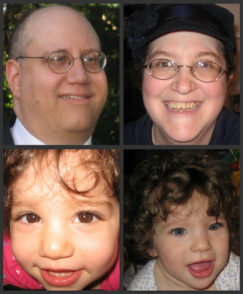 A little over a year ago, Nomi and I, proud Brookline residents for fifteen years, became the parents of two beautiful twin baby girls.  I’m an editor of science textbooks and science fiction writer, and Nomi is a technical writer and freelance editor.  Given our professions – did you notice that we’re both writers and editors? – it seemed logical for us to share stories of Brookline parenthood with the rest of the town.

The girls, whom we will call Muffin and Squeaker from now on, are about 15 months old, and I had hoped that the major trials and tribulations of parenthood would be over by now.  No longer would we be dealing with the sleepless nights, the constant checking on the babies, the worries and fears.  When the kids were born, we obviously knew nothing about how to care for them, so it would take time to adjust.  But it’s over a year later!  We have a lot more experience than we did back then.  So surely things should go a lot more smoothly by now.

Alas, that isn’t the case.  As an example, let’s take the morning routine.

In an ideal world, our morning routine would work as follows.  Nomi and I would wake up at 7 AM with the alarm.  We would shower, dress, eat breakfast, and then I would be out the door well before eight, when our babysitter would show up and Nomi would leave for her job.  Meanwhile, the children would be sleeping blissfully away until about 9 AM, when they could gently awake and enjoy another day of mental and physical development.

The alarm goes off at seven, but who cares, because the kids have already been awake for anywhere from ten minutes to an hour, as we know from their wailing.  Not that we let them wail for too long; the moment we hear them, we drag ourselves out of bed to get them.  Depending on how much sleep we’ve actually gotten, we try to figure out our next step.  Usually, we dump them on our own bed to crawl around and giggle while we figure out who should get dressed first.  Oh, yeah, somewhere in there we use the bathroom.  While getting dressed, we also dance around the edge of the bed, making sure we don’t need to swoop down and grab a kid before she falls off.  Squeaker likes to crawl around but is generally calm in the morning; Muffin, on the other hand, loves the game of “let me throw myself back really hard from a sitting position onto a nice soft mattress without first checking to make sure that the edge of the bed isn’t behind me and that I’m not going to fall off the mattress and crack my skull.”

After we’re dressed, we bring the girls into the dining room, where the diaper table is still set up (don’t ask), and I change the diapers with Nomi’s help.  We then plop them into their high chairs and pour Cheerios onto their trays.

So our ideal world is already just a pipe dream.  In a semi-ideal world, at this point the kids would entertain themselves with Cheerios while we finished getting ready to go to work.  But the reality continues to diverge from this ideal model.  Both Muffin and Squeaker want us to spoon feed them Cheerios with milk, and both want out so they can play on the living-room floor…and we still haven’t made our own lunches yet.  And it’s not like we can leave them unattended for too long while we get ready ourselves.

As for the end of our morning routine, by eight o’clock we can pass the kids off to the babysitter and leave.  Except we can’t leave yet, because we haven’t taken care of half the things we needed to do just to get out of the apartment.  So I rush to make my lunches, pack my bags, check the weather to see if I need a coat or umbrella…

Only then do I manage to shlep myself to the T, just in time to arrive at work anywhere from twenty minutes to forty minutes late.  Thankfully, we live in Massachusetts, where most companies and co-workers understand the challenges that Nomi and I now face.

But, of course, we wouldn’t have it any other way.

About this column: The adventures of two Brookline parents and their twin daughters, Muffin and Squeaker. This column originally appeared on the Brookline Patch website. Copyright 2010 by Brookline Patch.