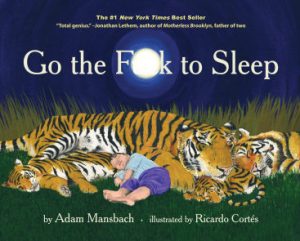 Last week an event occurred that will resonate for years in the minds of parents everywhere. No, I’m not talking about Father’s Day or even the Brookline Flag Day Parade.

On Tuesday June 14, Akashic Books, a Brooklyn-based small press publisher, officially released the children’s book parody “Go the (Expletive) to Sleep” by Adam Mansbach with illustrations by Ricardo Cortés. At first glance, the book looks like a pastoral children’s book. But it is filled with four-line verses that start off sweet, “The cats nestle close to their kittens now. / The lambs have laid down with the sheep.” and soon devolve into a refrain of despair, “You’re cozy and warm in your bed, my dear. / Please go the [expletive] to sleep.” The illustrations feature many different little kids in typical “cute” scenes but with a twist. In one picture, a child leans on a sleeping group of lions, smiling at the reader as if to say, “I’m not going to go to sleep and you can’t make me.” In another, a child escapes from his bedroom while the parent’s feet are seen in the foreground; it is clear from both the text and the art that the parent has given up and fallen asleep.

From the title, it’s obvious that the book is filled with language that parents do not want to share with young children. And yet the book has proven very popular with these same parents, who started sharing links on Facebook about the book months ago. In fact, there were so many pre-orders for the book that the publisher moved up the publication date. The book has struck a chord.

Full disclosure: Nomi and I bought a copy of the book – for ourselves, not for Muffin and Squeaker. As Nomi wrote about in , Muffin and Squeaker presented their own share of sleep travails. Today, we can put them in their cribs at 7 p.m., and even if they wail when we leave their room, they’re usually asleep within a few minutes. But for their first 18 months, it seemed like Nomi and I would never see a normal night of sleep again. As soon as we saw the book’s title, we wondered why we hadn’t thought of it ourselves.

And we’re not the only Brookline parents who found the book cathartic. Brookline resident Paul Hurwitz is a typical parent of young children and a member of the target demographic for the book. He works as a product manager at a software company in Natick, which means he has a long commute every morning and evening, and his two children are 4 years and 11 months old.

“Both of our kids still don’t sleep through the night,” he said. “The sentiments in the book are exactly what we are sometimes feeling.”

One of Hurwtiz’s children, he notes, used to take close to an hour to get to sleep. (When I heard that, I must admit that I was wondering why he was complaining, as I recall the times that Muffin was snoozing away by 8 pm but Squeaker was laughing, giggling, and crying until 3 am.)

I also asked Brookline writer Leah Cypess what she thought of the book. Cypess is the author of two young adult fantasy novels published by Greenwillow / HarperCollins: Mistwood and Nightspell, and the mother of two girls, ages 4 and 2.

“I think the book is funny because it reflects many parents’ inner thoughts at bedtime,” she said. “My husband and I listened to the brilliant Samuel L. Jackson reading, and while the profanity started to feel overused by the end, the first few pages had us on the floor laughing.”

From personal experience, I know what she means. The night we got the book, I tried reading it aloud to Nomi once we got Muffin and Squeaker into bed, and I couldn’t get through it without falling into tears of laughter.

Johnny Temple, the publisher of Akashic Books, has his own idea why the book is doing well.

“As a parent of two small kids (ages 3 and 5), I know that my first reaction to the book was one of intense identification. Sleeplessness is one of the core emotional hurdles of being the parent of young children, so this book lets people know that they are not alone in this (daily) struggle. Parents are so accustomed to swallowing their frustration and this book provides a cathartic release — while still being 100% child-friendly in that it helps to channel that frustration away from the kids.”

That frustration is very familiar to parents of young children. In fact, Nomi and I still feel that frustration sometimes when Muffin and Squeaker become the “queens of the delaying tactic” as they do whatever they can, such as running back and forth down the hall, to keep us from putting them to bed. So I’ve started to wonder – are there any parents out there who have become so exasperated with their children not going to sleep that they might actually try reading this book to them? (Other than Samuel L. Jackson, I mean.) Probably not. I suspect, however, that this is a book that parents will eventually share with their children – once their children are old enough to have babies of their own.

Author Adam Mansbach and illustrator Ricardo Cortés will be appearing at , 279 Harvard Street, Brookline, on Thursday July 14 at 7:00 pm.

About this column: The adventures of two Brookline parents and their twin daughters, Muffin and Squeaker. This column originally appeared on the Brookline Patch website. Copyright 2011 by Brookline Patch.

http://mabfan.com/contact.shtml
View all posts by Michael A. Burstein →
This entry was posted in Columns and tagged Adam Mansbach, bed times, Go the F to Sleep, Kids books for adults, Kids sleeping, sleep, sleep times. Bookmark the permalink.
Loading Comments...
%d bloggers like this: