Muffin and Squeaker Give Thanks 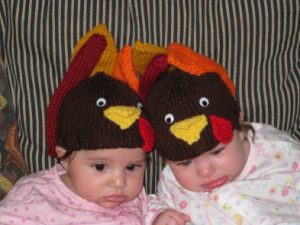 Yesterday, people across the United States celebrated Thanksgiving. While there are some standard elements — a meal with family and/or friends is the most common — Thanksgiving is a holiday with minimal ritual that gives us an opportunity to express our thankfulness for the bounty of what we have, be it material goods, family, good friends, or whatever we are thankful for.

Our Modern Orthodox Jewish family just completed a big fall holiday season at the end of October, so it is possible that we’d approach observing yet another holiday as a burden rather than a joyful event. However, since the day is not associated with specific ritual, we are free to observe the holiday to whatever level we are feeling up to, and for me this removes the burden that might otherwise be associated with the day.

The first Thanksgiving we had Muffin and Squeaker in our lives, they were not particularly aware of the day being different. The girls were four months old, and while they attended the family gathering in Newton, they were still not eating the Thanksgiving dinner. In fact, they both slept through the majority of the meal. I still remember turning to look at Squeaker, fast asleep in her carrier, as we ate. However, they did observe the holiday in one way — I had knit the girls turkey hats, and they wore them with a mix of bewilderment and vexation.

Last year, the girls were sixteen months old, and they participated more, but our Thanksgiving dinner was a much more scaled-down event. So while it was still fun, there were considerably fewer people for the girls to interact with, and again I was not sure they understood that there was anything significant about the day.

This year is different. We are again attending the large family gathering, where Muffin and Squeaker will have an opportunity to interact with relatives they haven’t seen since in August. The girls now have definite opinions on what foods they like, and as we discovered during the Jewish holidays, turkey is high on their list of foods they enjoy. However, that does not mean that they will choose to eat it with so many people around. They also have recently become more wary in large groups of adults, so while we have been telling people for months how talkative and expressive the girls have become, I worry a bit that they will be shy and not want to talk to the relatives.

In years that we do a small Thanksgiving dinner with my parents, I am often in charge of all side dishes and desserts while my mother is in charge of the main course. This year, since we are attending the large family gathering, I will only be providing one item to the meal: pumpkin bread. I have been bringing this dish to the family gatherings for a number of years, and it is always a big hit. Two years ago, I had to figure out how to find the time to bake the bread while tending to two newborns who relied on me for a majority of their needs. Now that the girls are older, I can reliably find time to be in the kitchen without the girls clamoring for my attention. At the same time, though, they are becoming more interested in what happens in the kitchen. When I come home with groceries, they want to help me bring them into the kitchen and put them away. They recognize much of what comes out of the grocery bags, and they want to identify the items for me. They get especially excited when they see things that they know are special for them — tomatoes, peppers, apples. So this year, when they see me in the kitchen, it would not surprise me if they want to unpack the ingredients for the pumpkin bread and then, if I let them, help me put together the recipe.

Michael and I are thankful for many things, including the opportunity to tell stories of Muffin and Squeaker, and especially for Muffin and Squeaker being in our lives. We wish everyone a happy Thanksgiving and a happy and healthy winter holiday season.

About this column: The adventures of two Brookline parents and their twin daughters, Muffin and Squeaker. This column originally appeared on the Brookline Patch website. Copyright 2011 by Brookline Patch.