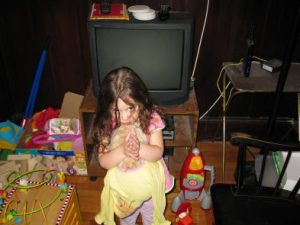 Years ago, a friend of ours invited us over to watch a movie at his Brookline apartment. While we were there, he also invited us to watch his daughter, then two years old, watch an episode of the TV show “Teletubbies.” (Yes, there was a lot of watching of watching that night.)

I was fascinated by her intensity in watching. I had never seen an episode of “Teletubbies” before, and I found it excessively repetitive and slightly insipid. One segment of the program had the Teletubbies characters watch a short video and then insist on seeing it again.

As I didn’t have a lot of experience taking care of two-year-olds, I was unaware of how much toddlers enjoy and appreciate repetition and how it can actually help with them learn. But at the same time, I thought it was disconcerting how absorbed a child could appear to be by a television show.

When Muffin and Squeaker were born, Nomi and I had to think about how we would deal with television. Like the vast majority of Americans, we enjoy television, and we watch a fair bit of it. On the other hand, we tend to be discriminating consumers of TV entertainment as well. When we first met, I was delighted to discover that, like me, in the 1980s Nomi didn’t just follow actors; she looked for TV shows by the same producers and writers as the ones she already liked. (Nowadays, many more people do that, and the Internet makes it easier to do so.)

We wanted to keep watching television after Muffin and Squeaker were born, but finding time to do anything with twin babies to take care of was a challenge. Up until they were about nine months old, we would occasionally have the television on while we were taking care of them, as they tended to ignore it in favor of other things. But one day, we turned the TV on while they were playing, and their heads swiveled to look at the bright colors on the screen. It felt like a scene in a horror movie; these children, usually active and laughing in play, had suddenly frozen in place, their eyes focused like laser beams on the talking object in the corner of the living room. They weren’t interacting with it or each other at all but just letting it spill its content into their vacuous faces.

And so off the TV went.

I know people who have gone on line and posted about the favorite TV shows of their infant and one-year-old children. Although I would not deign to tell someone else how to raise their child, I do find those comments worrisome. Nomi and I followed the recommendation of the American Academy of Pediatrics, whose guidelines recommend no screen time for children under two years old. (They actually first made this warning in 1999 but, as reported in the New York Times, reiterated it again last year at their annual convention in Boston.)

Despite my desire to keep the kids away from the screen, I have succumbed somewhat. After the kids turned 2, I felt more comfortable introducing them to “Dora the Explorer” and to “Sesame Street.” But instead of using the television set, we use a tablet computer. That allows me to sit with them and maintain control over what they watch and encourage them to interact with the story. I also console myself with the fact that the kids have come to understand that we do not watch television on Friday night or Saturday, when we observe the Jewish Sabbath.

For those of us who are trying to reduce the amount of TV our kids watch, there is help. The Campaign for a Commercial-Free Childhood, founded by Brookline psychologist Susan Linn, is sponsoring a“Screen-Free Week” this year starting on April 30. According to their website, “Screen-Free Week is a fun and innovative way to improve children’s well-being by reducing dependence on entertainment screen media, including television, video games, computers, and hand-held devices.  It’s a time for children to play outside, read, daydream, create, explore, and spend more time having fun with family and friends.  And, of course, Screen-Free Week isn’t just about snubbing screens for seven days; it’s a springboard for important lifestyle changes that will improve well-being and quality of life all year round.”

I have to admit that sometimes I feel hypocritical about the decisions I make for my children when it comes to television. I’m adamant about not putting a television set in Muffin and Squeaker’s bedroom, although I remember having one on my bedroom when I was growing up. I steer the kids away from watching too much television even as I then proceed to plop onto the couch in front of the TV after struggling to get them into bed. And at some point I do want the kids to watch the TV shows that I remember fondly, such as “Star Trek,” “M*A*S*H,” “The West Wing,” and “Doctor Who.”

But then I remember that I’m the parent. I know better. Or, at least, I tell myself that I do.

http://mabfan.com/contact.shtml
View all posts by Michael A. Burstein →
This entry was posted in Columns and tagged Kids and TV, Parenting and TV, toddlers and TV, Turning off TV, TV for children, TV for kids. Bookmark the permalink.

1 Response to Telling Off Television