Nothing But the Tooth

Getting Stubborn Kids to Brush Their Teeth 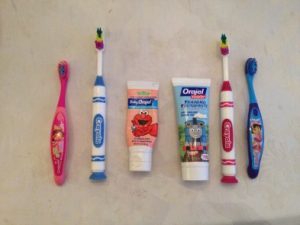 With the girls approaching their third birthday, we thought we were done with teething, but apparently we were wrong. Two of Squeaker’s back molars have just began erupting, causing her great pain. Nomi and I have been easing her through the teething process with children’s ibuprofen, chocolate pudding, and two small plastic icepack teething toys shaped like a cat and a dog that we got during their original round of teething.

Squeaker’s recent teething pain got me thinking about the troubles we’ve had getting the kids to care for their teeth properly. Dental hygiene is something of an interest of mine; I had perfect teeth for all of my childhood, and I even wanted to become a dentist when I was in elementary school. So from the moment Muffin and Squeaker’s first teeth started coming in, I wanted to make sure that we took care of them correctly. Nomi picked up some children’s toothbrushes with pictures of Dora the Explorer on them and training toothpaste with a picture of Elmo from Sesame Street on it, and my younger brother and his family sent the kids two Dora the Explorer “Great Smile Sets.” We thought we’d be all set as we introduced the kids to the necessity of brushing their teeth.

Little did we know how much they would resist. The kids are stubborn; as a friend of my younger brother once pointed out, “Burstein” and “stubborn” share six letters. We tried to brush their teeth ourselves at first, but they pulled away. We showed them how we brushed our own teeth, but they still weren’t interested. So for the first few months, we pleaded, begged, and cajoled and occasionally snuck a toothbrush into their mouths for a few quick brushes when they weren’t expecting it. Finally, they began brushing their teeth on their own, but rather haphazardly. A few strokes of the brush in the mouth, and Muffin would cry out, “I’m done!”

Clearly, we needed a better solution to this problem.

I thought I found it when our friend Daniel took us to the New England Aquarium. The girls were delighted to see the staff brushing the teeth of the seals in the tank outside. I thought I had a brilliant idea that night when I asked Squeaker if she wanted to “play seal” and have me brush her teeth. She agreed enthusiastically – for one night. The next night, she was back to wanting to brush her teeth herself and not doing a good job of it.

I thought it was just us, but then back in March I read an article in the New York Times on the rise of cavities in toddlers. Apparently, dentists all over the country are seeing a widespread problem with preschoolers’ teeth, to the point that some toddlers are having surgery under general anesthesia to fix their baby teeth. There seem to be a lot of reasons for this, but I suspect that for most of today’s parents the main reason is the same as ours: exhaustion. By the end of the day, we’re all so tired, and toddlers are so willful, that getting them to brush their teeth can be a real struggle. Also, as the article pointed out, no one really told us when we should be taking the kids to see a dentist for the first time. And there’s the question of whether toddler toothpaste is okay to use, as it doesn’t have fluoride in it. Fortunately for us,Brookline’s water is fluoridated, so that seems to be a non-issue for us.

Knowing we were not alone, however, still did not get the girls’ teeth brushed.

Cut to a few months ago. Nomi and I were supervising Muffin and Squeaker as they explored Sesame Street videos on YouTube, and by pure chance they came across theSesame Street: Healthy Teeth, Healthy Me: Brushy Brush Public Service Announcement. In the video, Elmo sings a fun song about brushing your teeth while various celebrities and kids brush their teeth and look right at you, as if they’re looking into a mirror. Muffin and Squeaker love this video. Immediately, they demanded their toothbrushes, and they began to brush their teeth vigorously. The video has now become part of our nightly routine. Just before bed, I set it up, and the kids watch it and brush their teeth.

The video is part of the Healthy Teeth, Healthy Me initiative, and I presume they produced it partly in response to the rise of pediatric cavities. For Nomi and me, it’s close to a miracle. With this one video, our kids went from being recalcitrant tooth-brushers to eager and enthusiastic ones. My hope is that when we do take them to their first dental visit in July, their teeth will be in great shape.

Shortly after publication, the Sesame Workshop issued a press release about the PSA and initiative mentioned above: Elmo and Abby Cadabby teach kids that Oral Health Counts. See the full release on their website.

http://mabfan.com/contact.shtml
View all posts by Michael A. Burstein →
This entry was posted in Columns and tagged kids dental work, Teething, tooth. Bookmark the permalink.
Loading Comments...
%d bloggers like this: