Scenes from a visit to the BU Child Language Lab.

It seems strange to me today, but according to what my parents told me when I was in my teens, “truck” was my very first word. Apparently, I was quite fond of a toy truck my parents had gotten me, and I played with it quite a lot. So, not surprisingly, “truck” ended up being my first word. After all, it was one of the most prevalent objects in my tiny universe.

I saw this sort of thing replicate itself last year when Squeaker and then Muffin spoke their first words. We fed them each a sliced banana every day, and when it came time for them to speak, “banana” was their first word. It doesn’t hurt, I suppose, that “banana” is a rather easy word to pronounce.

As all of our friends know, Nomi and I are fascinated with language. Nomi has written before about , and then she noted less than a year later . As it is, from the day that Squeaker first uttered the word “banana,” and Muffin followed with the same word a week later, we have been tracking as much as possible the words and phrases that they have used. (That list of words and phrases, by the way, is available to anyone who asks, though we’re not sure it would be of interest to many.)

So when we found out that Boston University has a laboratory devoted to studying child language development, it was a no-brainer for us to sign the kids up as possible subjects. Brighton resident Dr. Sudha Arunachalam (who lives so close to Brookline that the town line sign is posted just in front of her building) is the director of the Boston University Child Language Lab, and she emailed us after we got in touch. The research center is studying how children acquire language, and they are always searching for new subjects. As it is, we didn’t sign up until the girls were already two years old, so that meant that there were already studies they had missed. 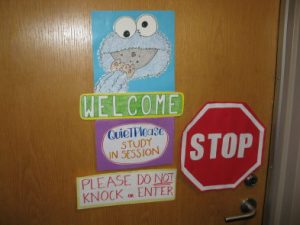 Fortunately, the lab was starting a new study in May, and our kids fell right into the age range they needed. It took a bit of juggling, but we managed to get an appointment for them to test the kids just before they would have aged out. We were very excited about participating, and we tried to interest Muffin and Squeaker by telling them all about how they would have a chance to watch some videos, which is a treat for them.

We arrived on a Friday morning, met one of Dr. Arunachalam’s research assistants, and were brought into a waiting room with decorations on the wall and a box of toys on the floor. As the girls played and tried to assimilate their unfamiliar surroundings, Nomi and I read over and filled out a variety of forms, including a Research Consent Form. I don’t think the lab had previously had any parents read the forms as intently as we did. We didn’t care so much about the permissions we were granting; we were much more interested in knowing what they were trying to learn. According to the forms, Dr. Arunachalam was working on a study of the mechanisms underlying word learning in children. To put it another way, what visual cues do children rely on when learning new words? It’s a question Nomi and I have pondered a lot, such as when Muffin uses the wrong gender pronoun for her sister.

After we signed the forms, Squeaker volunteered to go first, and she requested that Daddy come with her. I went with her into the study room. A chair with a car seat was set in front of a video monitor for the child to watch. Squeaker didn’t want to sit in the car seat, and she was a little frightened, so instead I sat in the chair with her on my lap.

The study requires the researchers to track the child’s eye movements, so I was required to wear a blindfold. Otherwise the scanner might have mistakenly tracked my eyes instead of Squeaker’s. The researchers showed Squeaker a calibration video to make sure they were tracking her eyes correctly. If you watch the videos that accompany this column, you’ll see that the red dots show you what Squeaker or Muffin is looking at. You’ll also see how funny I look with a blindfold on.

The research team showed Squeaker a series of videos in which a narrator explained what was going on in the video and then asked Squeaker questions. She answered by pointing to the videos. In order not to contaminate future studies, I can’t really say too much about this part, but I can present the gist of it. The narrator told Squeaker what someone was doing in a video, and then the screen showed two videos at the same time and the narrator asked Squeaker which side showed an activity similar to what she had just seen.

Squeaker was too uncomfortable to go through the whole series of videos, and when it was her turn Muffin stopped “playing the game” in less time than Squeaker did. The team assured me, though, that they had the data they needed. As a reward, each girl got to choose a toy from a box. Squeaker chose a stuffed dog in a Boston University shirt, and Muffin selected a mini football with the BU logo.

As Muffin and Squeaker have just turned three years old this week (and how did that happen?), they are aging out of most of the studies at the lab. But if you’re a parent with a young child, I urge you to sign up your child to participate in a study. It’s fun, and it’ll give you a new perspective on how we communicate.