Mornings Can Be Quite Alarming 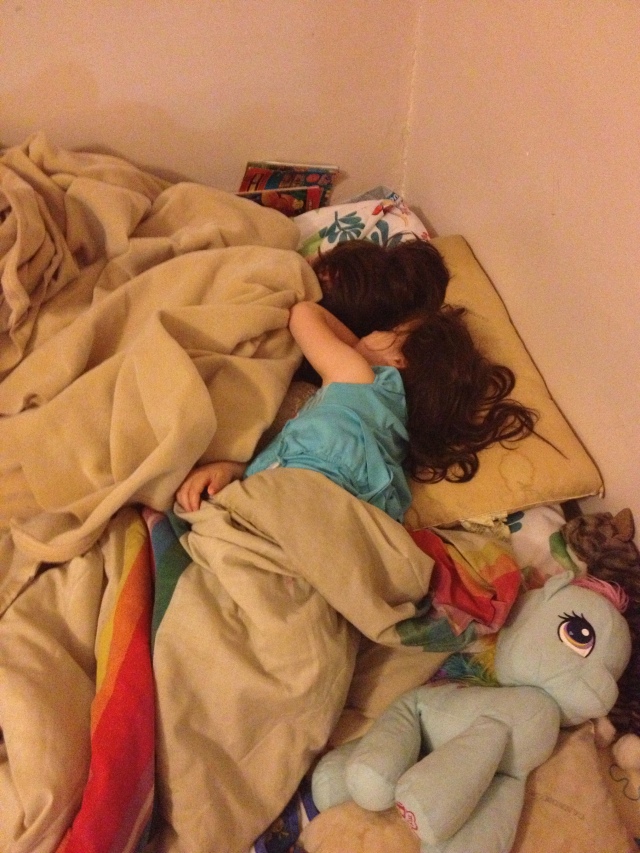 Since they were old enough to have an opinion on the subject, Muffin and Squeaker have been very vocal about their bedtime. “We’re not tired,” they’d say. “We want to play this one more game/hear one more chapter/invade this one last country!” (OK, so maybe I’m exaggerating about that last one.)  And when they were younger, the programs they were enrolled in did not have very early start times, so we were perhaps more lenient about enforcing bed time than we might have been. But Kindergarten starts at 8 AM, and they need to be there on time. We have about a 15-20 minute walk to school, so we want to be out the door by 7:30 AM to accommodate for slow walkers or other delays such as construction we have to route around or wild attack turkeys. This means getting the girls up by 6:30, which meant an adjustment not just for the girls but also for Michael and me.

We started discussing the change in schedule with the girls at the beginning of the summer. We explained to them that their schedule over the summer was somewhat flexible, because they were spending their days mostly going on day trips around the area with their babysitter, but that when school started we would have to be strict. We also tried to explain to them that the change of schedule meant that we were going to have to get up earlier and go to bed earlier so that we all get enough sleep.

Squeaker didn’t have much of an opinion on this, but Muffin decided that this meant that she and her sister needed an alarm clock. But not just any alarm clock; Muffin had specific ideas about the alarm clock and what it should be like, but she could not articulate exactly what she wanted. This made it hard for me to buy the girls an alarm clock. All she could tell me specifically is that she wanted a purple alarm clock. I decided that the best place to try to get an alarm clock was the Cambridgeside Galleria, because there were a number of places in the mall that could potentially carry alarm clocks. The plan that Michael and I worked out was that he would take the girls to the Museum of Science on a Sunday while I went over to the mall, and then I would meet up with them. However, since she could not tell me what the clock should look like, Muffin decided that she had to come to the mall with me. Therefore, on the Sunday of Labor Day Weekend, when Squeaker decided that she needed to go to see the Grossology exhibit at the museum before it closed, Muffin and I headed to the mall.

We started in one of the larger department stores, figuring they’d have a good chance of providing a selection from which she could find a clock that made her happy. No luck. And no luck either in any of the next seven stores we went to. After trying more department stores, some discount department stores, and some electronics specialty stores, we were tired and hungry. So, while eating a snack and discussing what was wrong with all of the limited number of clocks we *did* see, Muffin asked if we could look online. And ultimately, that is what we did. I found a bunch of possible clocks that would fit Muffin’s criteria, and I let the girls choose which one they wanted from that selection. They finally chose one that made them both happy, and we ordered it. Unfortunately, it wouldn’t arrive until after the first day of school, but it would arrive before the end of the first week.

The night before the first day of school, we had the girls set out their outfits for the first day of school. We put the girls to bed extra early (though since they can’t yet tell time, they didn’t know how early we started the going-to-bed process) so that they would get a good night’s sleep. The next morning, Michael and I woke up at 6:15, giving ourselves a brief window in which to get ourselves ready before we had to get the girls up. When we went to wake the girls, there was some whining and moaning, but in general they got up without much fuss. We helped them get dressed and find something to eat for breakfast, and then we packed up their backpacks and headed out. We arrived at the school before 8 AM and had them into their classroom in plenty of time. I was full of optimism that we would be able to get the girls out of the house every morning with the same level of success.

It wasn’t even 24 hours before I was proven wrong. And since then, it has been a struggle to get the girls out the door on time. We try, every morning. I prepare their lunches the night before, they choose their clothing the night before, and before I go to bed I make sure that the girls’ shoes are set somewhere that they’re easy to find. Yet something always delays us: one of the girls can’t figure out what she wants for breakfast, or the other decides only after we walk out the door that she needs her sweater.

Adjusting to the new schedule demanded of all of us will not be easy, but I do have faith that we will get there eventually. I’m just glad that the teachers are lenient about us being a couple of minutes late.

Like Loading...
This entry was posted in Columns and tagged bedtimes, childrens bedtimes, Morning routines with twins. Bookmark the permalink.

1 Response to Mornings Can Be Quite Alarming